We have been going back and forth a bit with the Lerum Kommun (local council) since moving in about a tree that covers most of the front of our house, is HUGE, unhealthy and that the entire neighbourhood has wanted removed for years. For me, I wasn’t so sure at first because I liked the privacy but a beautiful 100 year old Oak tree was hidden behind these tree and it kept our house in the shade for the whole morning and made the front garden feel very damp.

It looked like this, and this is after it was trimmed back once by the council a couple of weeks ago: 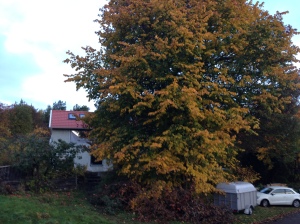 The council told us to take it down was no problems, but it was just that we would have to pay for it… gee, thanks!

Anyway, we found a company called Edsås Träd och Underhåll who were super helpful and gave us the best price to take it down and remove everything (apart from the wood which we will use in our fireplace). So on Thursday morning they two people came by to take it down, and holy shitball!!!! It makes an amazing difference, it is probably the best thing we have done so far.

It was really cool to watch the guys take the tree down bit by bit, so I made a short video…

I haven’t posted much lately about the work inside of the house, mainly because we haven’t done much the last couple of weeks, though soon enough I will be posting with the results of our bathroom renovation! 🙂 Here is a sneak peak:

Today we worked a bit more clearing out the garden before it began to pour rain.  Fredrik even let me use the big grass trimmer… he was a bit hesitant because it is actually bigger than I am. After the rain started we headed inside and started to take down some of the wooden paneling etc in preperation for removing the wall this week. Tomorrow we will begin the stressful task of having a crane lift the supporting beam in to the attic to support the roof after the wall is removed. Photos of that to come… wish us luck! 🙂 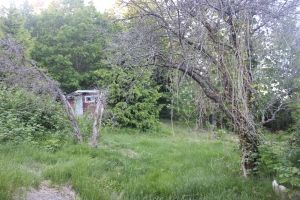 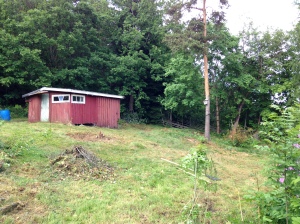 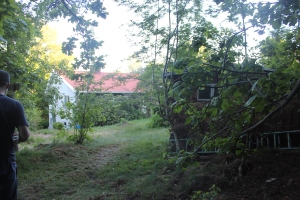 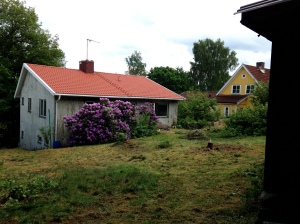 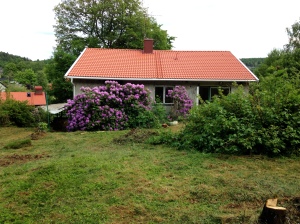 Amanda with her new favourite tool! 🙂 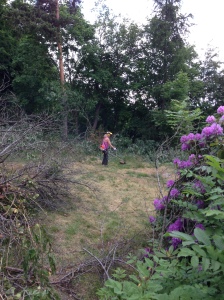 Now that we have the time, we are finally starting to take steps to get the garden under control. I told a lot of people that the garden was crazy but I don’t think anyone really understood exactly what I meant, many commented ‘I love gardening’, then when they see it they mostly seem shocked and say, ‘Oh, wow this really IS crazy’. I guess you could more accurately describe it as a jungle. The old man who lived there loved his garden but obviously he hasn’t been able to work in the garden for at least 10 years.

We have really started to see progress now, which feels awesome! Reassuring that this big renovation project is possible. Our neighbours have also been stopping by to say how glad they are to see that someone is finally clearing the jungle. One neighbour said she hasn’t seen the house in years.

So what have we done?

1) Cleaned out and painted the garage. We need to store a lot of tools and deliveries in here, so we thought this was a good place to start! We put in a new concrete floor and and gave it one rough coat of paint. 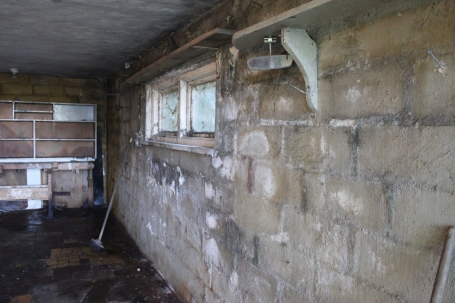 2) Taken the ivy down from the walls of the house and little outside area. SHIT JOB! That stuff is evil! I used to think it was pretty but it really is just a weed. It leaves all of the Arial roots on the wall which are pretty much impossible to take off. We started today to get these off with the high pressure hose, it doesn’t get them all but it makes a difference. I will put up some after photos when it is done. 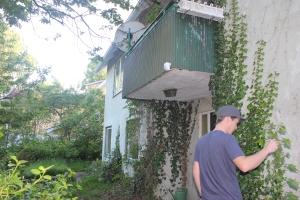 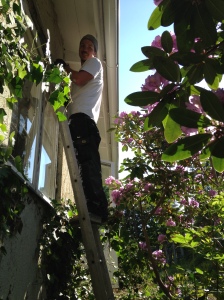 3) Trimmed back bushes, cut grass and chopped down about 12 trees… that is right 12! Not all small either. The difference is astounding. So much more light and everything feels so much bigger. 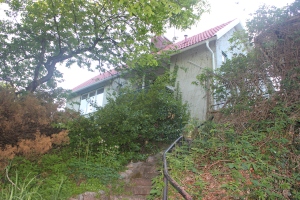 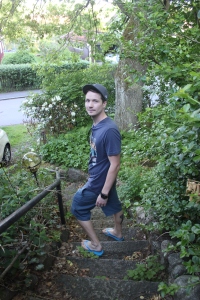 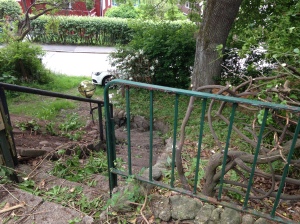 More  Progress and After Shots: 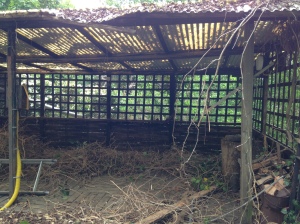 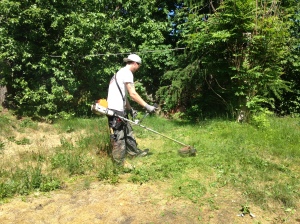 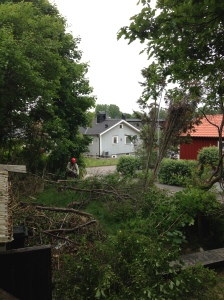 We also had a few helpers and our first picnic in the garden! 🙂 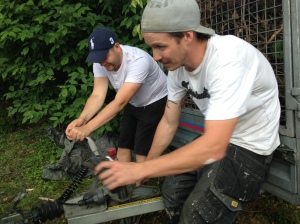 It has been a while between posts, but that is because we have been waiting patiently to get the keys. We finally will get the keys to our kingdom on Thursday… woohooooo!

We have been out at the house today, sneaking around the garden because the owners have moved out. There is a lot to do in the garden, it is completely overgrown and out of control. There are so many pretty plants and trees but we have to get rid of a lot. Before we do, we need to identify what is what.

Any garden experts out there who can identify any of the plants in these pics? I guess some of them are maybe weeds, but I can’t tell the difference! Let us know! 🙂 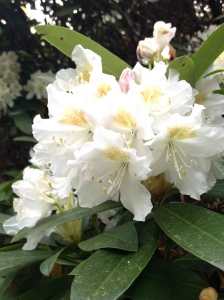 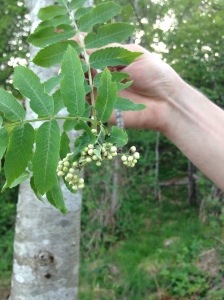 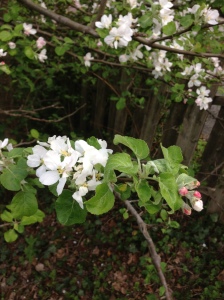 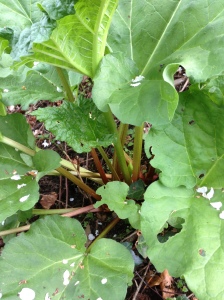 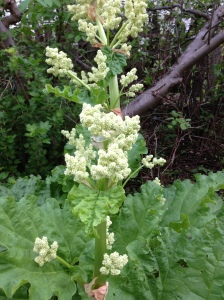